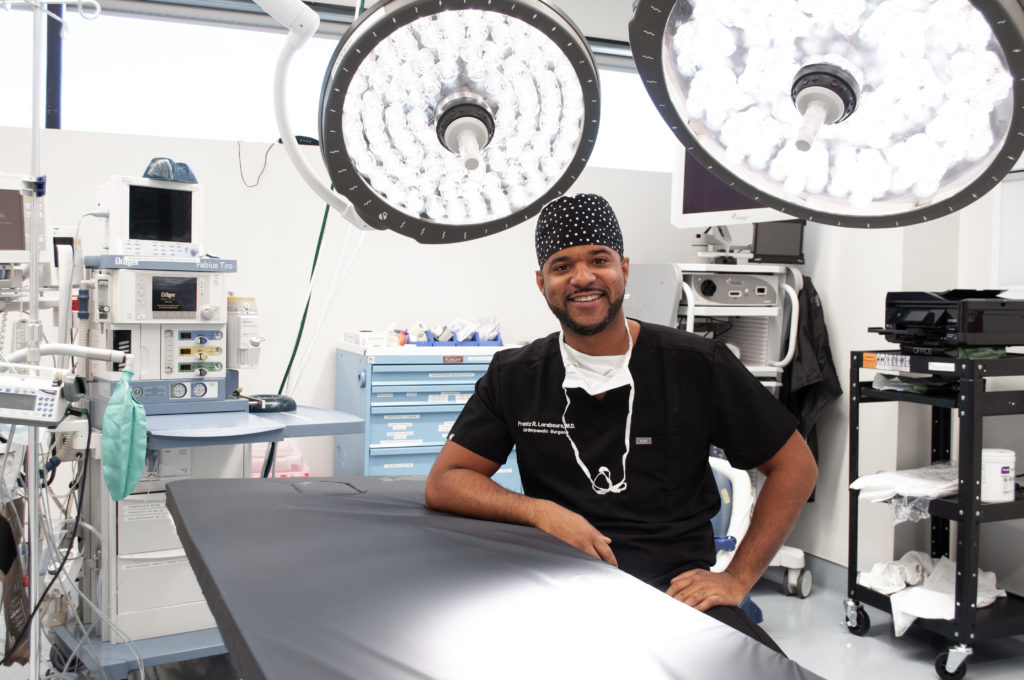 Snibbe Orthopedics is already growing in 2019 with the addition of our newest Orthopedic Surgeon, Dr. Frantz Lerebours! Dr. Lerebours is originally from Long Island, New York and attended Howard University College of Medicine. After completing his orthopedic residency at the prestigious Hospital for Joint Disease, and completing a sports medicine fellowship at world-renowned Kerlan …

THE FUTURE IS NOW! Dr. Snibbe is performing Total Knee Replacements with the Stryker Mako Robot at Saint John’s Health Center in Santa Monica. This technology utilizes a pre-operative CT scan and intra-operative data points to map the knee prior to making any bone cuts which allows the surgeon to evaluate the soft tissues in …

Dr. Snibbe makes the cut for Safest Doctors in L.A.

Orthopedics This Week • Mon, July 27th, 2015 ProPublica, an independent, non-profit newsroom that produces investigative journalism in the public interest, created a searchable web app which allows anyone to search the Medicare database for specific hospitals or doctors and then to see their complication rates per CMS (Centers for Medicare and Medicaid Services). Additionally, …

Dr. Jason Snibbe has been named one of L.A.’s Top Doctors by Los Angeles Magazine! How the List Came Together With great sprawl comes, among other things, a great deal of choice: You happen to live in a region loaded with cutting-edge medical institutions and highly skilled doctors. But finding those doctors in the sea …

Dr. Guerra to speak in NYC

Dr. Guerra will be the Visiting Professor at SUNY Medical Center this month when she lectures on soft tissue engineering and instructs a cadaver course on flap reconstruction for the upper limb! Make sure you check out her posts later this month on Instagram!

Snibbe Orthopedics welcomes Dr. Sara M. Guerra to the practice! Dr. Sara M. Guerra is a dual board certified Plastic and Reconstructive surgeon with fellowship training in Hand and Wrist Surgery. She specializes in surgery of the hand, wrist, as well as breast, skin, and cosmetic procedures. She is known for Wide Awake Hand Surgery …

Snibbe Orthopedics would like to wish you all a happy and health new year!  Cheers to 2018!

Why the Fit Are Replacing Their Hips

Click here to view this Equinox article explaining why those who lead active lifestyles are replacing their hips.

Platelet-rich-plasma is a new treatment option for a variety of injuries and orthopedic conditions.  Blood is made of RBC (Red Blood Cells), WBC (White Blood Cells), Plasma, and Platelets. Platelets, which are essential and responsible for blood clotting, have also been found, that when activated in the body, release healing proteins called growth factors. These growth factors …

We are pleased to announce that Dr. Snibbe, in collaboration with other physicians, have authored a manuscript entitled “The effect of platelet enriched plasma on clinical outcomes in patients with femoroacetabular impingement following arthroscopic labral repair and femoral neck osteoplasty” .  The manuscript will be published in an upcoming issue of the Journal of Hip …

Dr. Jason Snibbe has been invited to Madigan Army Medical Center in Tacoma, Washington. He will be presenting grand rounds on hip arthroscopy and the treatment of hip injuries.

After undergoing a hip arthroscopy by Dr. Jason Snibbe in 2008, Allen Bradford bounced back and quickly resumed his role as tailback for the USC Trojans football team. The #2 rusher for this football powerhouse will continue into the pros, as Allen was selected by the Tampa Bay Buccaneers in the 2011 NFL Draft. We congratulate Allen on his outstanding accomplishment and wish him success in the NFL.

We are pleased to announce that the third ISHA Annual Scientific Meeting is being held in Paris, France on October 14–15 , 2011. This meeting provides a unique international forum for attendees to share scientific information and learn the latest advancements of arthroscopic surgery for the hip.